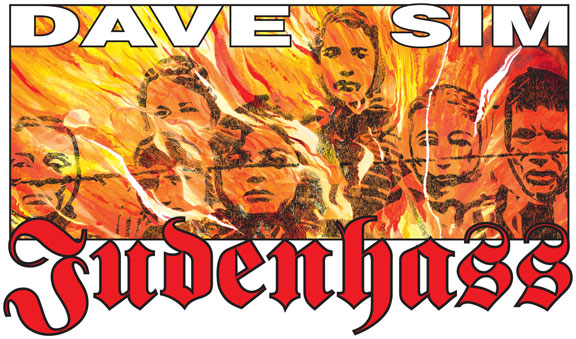 In the Monty Python skit, “The Church Police,” a murderer being taken into custody admits his crime saying, “It’s a fair cop, but society’s to blame.” The detective replies, “Agreed. We’ll be charging them too.”

Judenhass, is Dave Sim’s indictment of society, as the intellectual accomplice in the Third Reich’s acts of genocide.

Sim here, as in his other new project, Glamorpuss is working on developing the illustration style of photorealism. Unlike Glamorpuss, where the story is seemingly an afterthought, the art is used in service of an editorial essay in Judenhass.

Bob Mitchell reviewed Judenhass on his blog, but I came away feeling he missed the point of Sim’s essay.

From my comments to Mitchell review:

The point was that the hatred of the Jews permeated world culture (or at least the western world) that some such tradgedy like the Holocaust, if not the Holocaust itself, was inevitable. In fact such genocidal slaughters of Jews did have prior precident, as was cited in Judenhass.

The point is that such barbarism does not spring forth from history cold. The widespread hatred for Jews and the intellectual arguments that went largely unchallenged for centuries justifying it made the Holocaust possible, indeed made it probable (even “inevitable”, as Sim puts it) that such an event would happen. Such arguments weren’t just made by history’s villains, such as Hitler, but by respected individuals, such as Mark Twain, Henry Ford, Martin Luther, and others throughout history.

Such hatred not only fueled the genocide itself, but also the shut off escape routes as shown by the refusal of other nations to accept Jewish refugees.

The ultimate point is that just saying “never again” is not enough. You need to see the root cause of the Holocaust as the hatred, and its rationalizations, and confront it in the present.

There’s a lot of excuses still made for Jew hatred today, even by respectable people. (Just read the tail end of Will Eisner’s The Plot)

“Randomly, the last page of the book even throws in a line from a previously-unheard-of Soth Korean comic book artist called Rhei Won-Bok who says: “The Jews are an invisible force that controls the US.” The significance of this is lost on me,”

The significance is that such hatred still exists today. And Sim is going beyond just indicting history, an easier task, and pointing out one such example in the here and now, in our own sub-culture of comics.

This modern day example of judenhass from a comics creator creates a sad bookend to the opening of the book which named the many giants of the golden and silver ages of comics who are highly respected, who are Jewish.

It’s Sim’s way of saying could have just as easily been them, and highlighting the sad irony that a creative descendant of these Jewish comics professionals continues to engage in the hatred that consumed so many Jews, and if unchecked, could do so again.

Mitchell, in my opinion, belittles Sim’s work further on in the comments when he adds:

“I wouldn’t call Judenhaas a historical essay, and it’s certainly didn’t require enormous research. I think all his quotes are out of context myself, they’re just segments designed to further his own argument.”

In the back of the book Sim goes into the his sources and the effort put into making sure that he wasn’t taking these quotes out of context.

His sources and research are shown on the Judenhass website in the Production section.

He specifically lists two quotes attributed to George Washington and Benjamin Franklin, that he tossed out as inauthentic, and likely to be created by Jew haters to give false authenticity to their opinions.

He also links to the original material from where several of the quotes he cites comes from, (Including anti-Jewish works by Martin Luther, Mark Twain, and Henry Ford) so that people may look and see for themselves that the quotes were not taken out of context.

Mr. Mitchell, you may “think all his quotes are out of context.” But it certainly “doesn’t require enormous research” to find that they aren’t.

Judenhass is exclusively available in comic shops. Find one and buy a copy. If they aren’t in stock, ask them to order a copy for you.